A short animation clip by PUNK Magazine's John Holmstrom is shown on Youtube:

In this fun short animation "In the Dump" you see dogs are forming a band and play in the live venue the CAVE, that look-a-like of the legendary CBGB with the owner the Bear (based on CBGB owner Hilly Cristal!), in the trashy part of town called the Dump...! 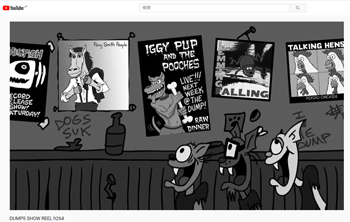 Must-See are the posters found on the wall of the CAVE; these are the parodies that John produced based on the album covers of musicians related to CBGB/NY underground scene of 70's, with various animals replacing the musicians. Do you know which album arts they are?
Animation was well produced with aid of many talented friends of John, wish we have a series of episodes!

The clip is also used in the music video of the band My World as well:
My World "Ratatat" （Apple Music）